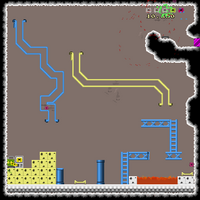 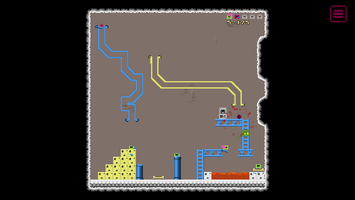 A Ruthless World is finished for the Gamedev.js Jam 2022. It's been an interesting 9 days and all in all quite pleased with the progress.

Using the template/library that I had been working on for the past year turned out to work quite well. It was not finished, but most of the structure was in place. The week before I had added support for using Tiled to create levels and to setup initial properties and colliders for game objects. This turned out to be a life saver, while the support is basic, it did save a lot of time being able to create a level and, in particular, create collisions in Tiled.

I could have planned and made use of the days better. Things like making a particle and sound class was not really needed, could have used @pixi/particle-emitter and howler.js directly and gotten more done for the game. Instead I spent time making nice classes for them that did not have much use now, but will be nice to have in the future. As a result the game is completely silent! Got the stuff to play audio, but scrapped making any audio.

As for the gameplay, this version of the game is perhaps not what I had in mind when I started. I was thinking of a slower puzzle game, where you plan and toy with physics to solve each level. The gameplay at the moment is more of the "be precise and smooth with your movement to sweep through the level and complete it asap to set a new record"-type of game. The main reason for this was because it saved quite a bit of time not having to do as many game objects and script functionality for them. Part also due to spending too much time with the player control and feel, think it turned out quite well but was another area of spending time that could have been used better.

Any feedback and comments most welcome.